Obama and the Election of 2010

Tomorrow, America goes to the polls. Certainly, different voters will be motivated by different factors when choosing the candidates for whom they will vote. However, are there any single factors that dictate the overall direction of voter sentiment in an election?

The graph below plots the number of seats gained or lost in the Senate and in the House of Representatives by each President’s party in a midterm election against that President’s approval rating, as measured by Gallup, for all midterm elections from 1946 to 2006. Positive numbers represent a net gain of seats, while negative numbers indicate a net loss. Using standard least-squares linear regression, I have produced a best-fit line for each data set. 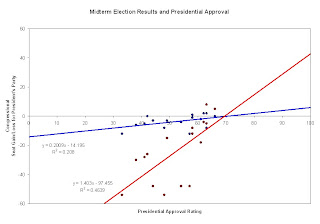 The least squares regression generates the equation S = 0.2009A – 14.195 for the Senate, where S is the gain or loss in Senate seats and A is the President’s approval rating at the time of the midterm election; and the equation H = 1.403A – 97.455 for the House, where H is the gain or loss in House seats and A is, again, the President’s approval rating on election day. The goodness of fit R^2 for these models are 0.2080 and 0.4639, respectively.

Although the fit is not especially good—actual midterm election results have deviated from the Senate model by as many as 9 seats, and from the House model by as many as 31 seats—one aspect of the two models suggests that the model is, in fact, reliable in principle, though highly imprecise in practice. Specifically, both regression lines cross the A-axis at nearly the same point. This improbable coincidence suggests that both trends, though weak, are indeed causally related to the same phenomenon; and that the threshold of Presidential approval that determines whether or not the voters choose to reward or check a President by increasing or decreasing his party’s strength in Congress, is practically the same for both the Senate and the House. These facts point to the conclusion that these models are highly accurate but also highly imprecise.

With the model explained, all that is left is to make predictions based on the models and test those predictions against reality when the actual election results are reported tomorrow night.

Obama is certainly below the threshold at which his party could have avoided a loss of seats in Congress. Specifically, the models predict that the Democratic Party will lose five seats in the Senate and thirty-four seats in the House of Representatives in tomorrow’s election. Given the historical margins of error for these models, the Democratic Party could actually lose as many as fourteen Senate seats and as many as sixty-five House seats. The real election results will almost certainly be located between the extremes. Most conventional analysts have predicted that the Democratic Party will lose control of the House of Representatives but retain control of the Senate; this prediction is within the margin of error of these models. Indeed, given the margin of error, it is more likely than not that the Democrats will in fact lose control of the House of Representatives tomorrow. 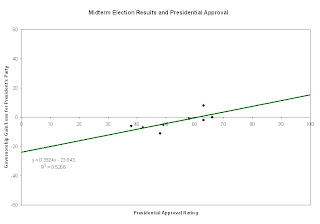 This model has a better fit that the previous two—the goodness of fit R^2 is 0.5266. The gubernatorial model predicts a net loss of six governorships by the Democratic Party in tomorrow’s election.

In science, hypotheses are constantly modified or rejected outright in response to new data. This study of poll data and election results is no different. Tomorrow’s election results will be added to the data sets, which will help produce more accurate models or, alternately, disprove the models and their underlying principles entirely. In the days following the election, I will post a complete analysis of tomorrow’s election results and the impact they have on these models.
Posted by The Interesting Times at 8:08 PM No comments:

On January 20, 2009, Barack Hussein Obama was sworn in as President of the United States of America. He entered the Oval Office with a 67% approval rating as measured by Rasmussen Reports. When Gallup posted its first polling results for the new President four days into his term, his approval rating stood at 68%, the highest of any new President since Ford’s inauguration in 1974. Obama was variously hailed as a Democratic Ronald Reagan, another John F. Kennedy, or even a new Abraham Lincoln.

Four hundred days later, President Obama’s approval rating according to Rasmussen Reports has fallen to 45%, while he just barely holds on to majority approval in Gallup’s polling. His approval ratings have plummeted faster than those of any President since Presidential approval was first polled by Gallup. Instead of Reagan, Kennedy, and Lincoln, some commentators now associate Obama with Jimmy Carter, Richard Nixon, or even James Buchanan.

Why has President Obama fallen so far, so fast? Is there any pattern to his decline other than a general downward meander? It is possible to forecast Obama’s political future based on this trend? How will the President’s approval ratings affect his party’s chances in November’s Congressional elections? How will they affect his chances at reelection in 2012?

In this article I will attempt to address the first three of these inquiries. In later articles I will discuss the remaining two questions.

The following graph shows President Obama’s approval rating from his inauguration until the present day. I have also fit an exponential decay curve to the data using the standard least-squares regression method. 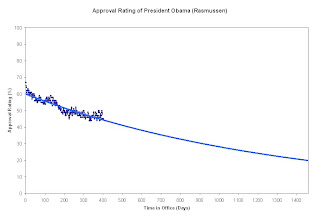 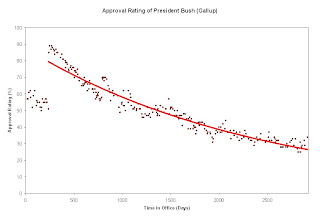 Reason for the Decline

The exponential nature of Obama’s decline may provide insight into the cause of his decrease in popularity. In an exponential decay function, the rate of negative growth is proportional to the function’s current value. In other words, the higher Obama’s approval rating was, the faster his approval rating declined.

Counterintuitively, then, Obama’s worst enemy was actually the high level of confidence the American public had in his ability to be an effective President. The story of Obama’s decline is essentially the story of his failure to meet the public’s expectations.

What this failure to meet expectations consisted of is open for debate. Some of the President’s most forceful conservative critics will say that the American public merely expected competence, and the inexperienced and unprepared Obama did not deliver. Other detractors on the right hold that Obama campaigned as a moderate but has been governing like a left-wing radical. Liberal commentators, on the other hand, believe that the electorate voted for an unapologetic Democratic agenda, and that President Obama has been too moderate on issues like health care, the environment, and the war in Afghanistan. Still others will no doubt argue that many of the things the public expected to see in Obama’s first year in office were simply unrealistic. All of the comparisons to great Presidents of the past may have done more harm than good. Moreover, Obama himself may have helped to stoke unrealistic expectations through such instances as when he referred to his election as “the moment when the rise of the oceans began to slow and our planet began to heal” in his election-night victory speech. Some of his supporters seem to have believed that America would instantly turn the corner on some of its most difficult challenges as soon as Obama became President. In the absence of specific data, however, I will leave it to the partisans to argue over the way in which Obama failed to meet the public’s expectations.


The Future of the Obama Administration

Assuming that no outside factors prevent further consistent drops in his approval, we can use the exponential decay model to predict Obama’s future approval ratings. As of today, the equation for the exponential decay model of Obama’s decline is A(t)=59.974065e^(-0.000755t), where A(t) is Obama’s approval rating on a given date, t is that date as expressed by the number of days since Obama took office, and e is the natural base.

Based on this formula, I predict that, on the day of the 2010 Congressional elections, President Obama will have an approval rating of 37% as measured by Rasmussen Reports. Later, on the day of the 2012 Presidential and Congressional elections, Obama’s approval rating will stand at 21%. Finally, on Inauguration Day in 2013, Obama will complete his term with an approval of only 20%, making him the least popular President to hold office since Presidential approval was first polled.

I will update these projections periodically as new daily approval ratings are published.

In a future article, I will discuss the relationship between Presidential approval rating and the performance of the President’s party in mid-term elections. I will also publish my predictions for the outcome of November’s Congressional election, based on that relationship.
Posted by The Interesting Times at 8:40 PM No comments: